Dag 2 - Arrival - Chiang Mai
After probably a stopover in Bangkok you arrive in Chiang Mai in the early afternoon. The tour leader will be at the airport to meet you and take you to the hotel in the city center. The entertaining and extremely lively night market begins at the end of the afternoon. You’ll immediately feel at home in the relaxed atmosphere of the bustling cafes and friendly Thai people.

Dag 3 - Chiang Mai - Overnight stay, day trip
In the morning you get to know your motorcycle, following an charming route through the ancient city, encircled by city walls and a canal. If there is still time in the morning, we will also ride to the Wat Prathat temple, located on a mountain just outside the city. After an early lunch we set off on a long ride of almost 80 kilometers west of the city. After 10 kilometers on the highway, we head into the mountains for over 60 kilometers of winding roads. We leave the mountains north of Chiang Mai and, riding along a stretch of highway, return to the city.

Dag 4 -  Chiang Mai - Mae Sariang
The day begins with an hour of highway, heading south. After a coffee stop in Chomthong we ride into the mountains. The road becomes narrower immediately and on both sides you see the dense rainforest. You will also quickly encounter the first Hmong hill people. The highest mountain in Thailand is Doi Inthanon at 2565 meters. We can make the nine-kilometer climb to the top of the mountain by motorcycle. You will not go higher than this during this trip! From the top you get an unrivalled view of the mountains of Northern Thailand. After the descent it remains a splendid route to the small town of Mae Sariang. This village is located at the intersection of the long road along the border with Burma.

Day 5 - Mae Sariang - Mae Sot
The road runs the whole day along the border with Myanmar. It is an unknown and little-travelled area, especially in Thailand. We climb up to and over a couple of mountain passes where the small villages are inhabited by indigenous people. Here and there, you will also come across a Burmese refugee camp. Mae Sot is the border town between Myanmar and Thailand and is recently open to foreign tourists. One of the biggest refugee camps with Burmese refugees is also located in Mae Sot. The refugees are mostly members of indigenous Burmese ethnic groups who have been involved in years of struggle against the Burmese government.

Day 6 - Mae Sot - Moulmein
The border procedure takes some time. We take leave of the Thai support vehicle here. On the other side of the border this role will be taken over by a car from Myanmar. Thereafter, we ride the first kilometers on Burmese territory. It takes some getting used to but, unlike in Thailand, one rides here on the left hand side of the road! We soon we find ourselves weaving through the beautiful Dawna mountains, a narrow mountain range that forms a natural border between Thailand and Myanmar. We ride out of the mountains heading west, ending at small town of Moulmein, located at the mouth of the Salween River

Day 7 - Moulmein - Kyaiktho
We ride on inwards through the lowland to the village of Kyaiktho which lies at the foot of the eponymous (holy) mountain. From here we travel by truck on a steep, winding road up to the extraordinary Golden Rock temple. (Unfortunately we are not permitted to do this by motorcycle). We sleep nearby this temple.

Day 8 - Kyaiktho - Yangon
After visiting the temple, we descend once more to the coast and ride on to Yangon, the former capital of Myanmar. It is still the largest city in Myanmar. In 2013 the government was suddenly moved to a new location in the middle of the country, Pyinmana becoming the new capital. Yangon is a colorful and multicultural city. Many Indians, Bangladeshis and, of course, Burmese and members of the different ethnic groups of Myanmar live here.

Day 9 - Yangon - Overnight stay
Yangon is an agreeable city to spend a day in. In the morning we can visit the famous Schwedagon Pagoda and thereafter ride to the Sule Pagoda. In the afternoon you can discover the rest of the city for yourself. 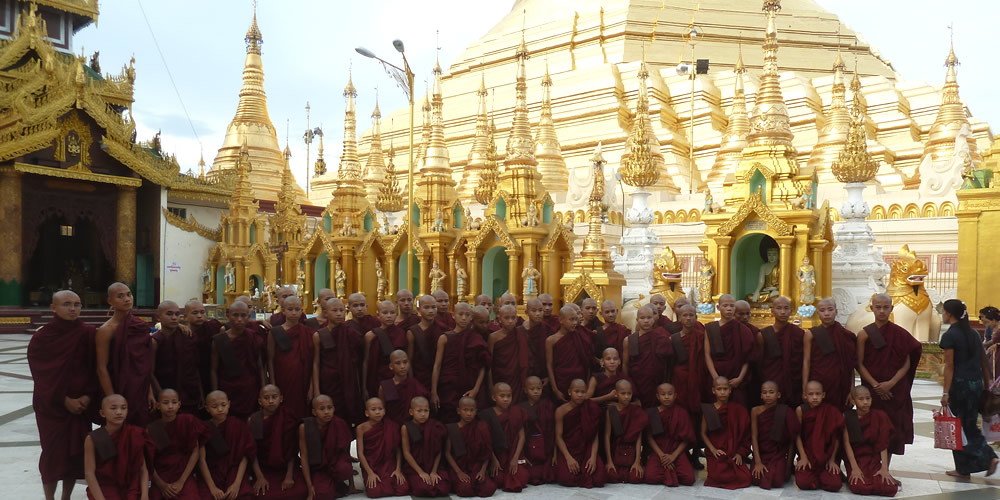 Day 10 - Yangon - Pyay
Early in the morning we ride out of the city towards the northwest. In the vicinity of the city it remains busy but out here one feels as if one is in a deserted land. We are now entering the delta area of the country. One sees small rivers everywhere and, of course, a great many paddy fields. It is an impoverished region which was hit by severe flooding several years ago. On the way we can visit Thayekhittaya. From the 5th to 9th century, this city was the ancient capital of the Pyu kingdom. If we are on schedule, before we go on to the hotel in Pyay, we can visit the mighty Shwesandaw Paya Pagoda, from which point there is a beautiful view over the city. Pyay is one of the larger towns of the country but you will experience it as a village. The town is famous for the colorful parasols that are made here.

Day 11 - Pyay - Baga
Today is a somewhat longer riding day. The full route more or less follows the Irrawaddy River which cuts through the bulk of Myanmar in a north-south direction. Wherever possible we will take the small roads along this great river. In Myanmar it is always necessary to see if one receives permission to do so. Freedom of movement and travelling at a whim is not always allowed. At the end of the day we arrive in the unique ancient city of Bagan.

Day 12 - Bagan - Overnight stay
Bagan is certainly one of the highlights of the trip. We will stay here one day to visit the 30 square kilometers of abandoned, often secular temples. One can do this by motorbike. For a change, however, you can perhaps hire a horse and carriage for today and visit at ease the most beautiful temples. The combination of temples, dust, clear blue sky and creaking carriages result in unique photographic images.

Day 13 - Bagan - Mandalay
Today we ride via Myingyan in the direction of the Irrawaddy River. We cross the river in Sagaing and stop a little further along the way at the famous U Bein Bridge. This is the longest wooden footbridge in the world. It is a fine sight to see the trail of monks and girls sporting colorful umbrellas walking across the narrow bridge. This is particularly impressive at sunset. The spectacle can best be appreciated from the teahouse at the end of the bridge. Mandalay is the second largest city in the land. The economic growth of the city is huge due to the large presence of Chinese businesses. In the middle of the city there is an old fortress, surrounded by high walls.

Day 14 - Mandalay - Overnight stay
Today is a free day to explore Mandalay and its vicinity. It is definitely worth visiting the ancient capital of Myanmar, Amarapura. Here you will find the famous Pahtodawgyi Pagoda and the much photographed U Bein Bridge; a footbridge made of teak and extending 1.2 kilometers over the Taungthaman Lake. No nails were used in the manufacture of this bridge! There is an impressive sunset to be seen at the Sutaungpyae Paya temple, located at the eponymous hill in Mandalay.

Day 15 - Mandalay - Inle Lake
We follow Highway Number 43 south. This winds through the mountains. At Lawkshaw we turn off and follow a narrow road to Pindaya. We stay in the eastern Shan State that borders on Thailand. The various Karen ethnic groups live in this state. Since Independence, the Karens have sought their own independent state, for which cause the Karen Liberation Army wages an ongoing fight. Access further into this state is not possible due to this conflict. If there is time we will visit the Pindaya caves. This is an extensive network of caves filled with thousands of Buddha statues. Next we ride onwards to the Inle Lake.

Day 16 - Inle Lake - Overnight stay
This is a lively area. In the mountains around the lake one finds various different tribes and on the lake itself there is always a floating market as well as, of course, the various leg rowers. In the vicinity of the lake there are also a number of monasteries to be visited. Staying here, we can make a day trip by boat across the lake. Alternatively, we can combine this with a motorbike tour of the surrounding mountains in the afternoon. 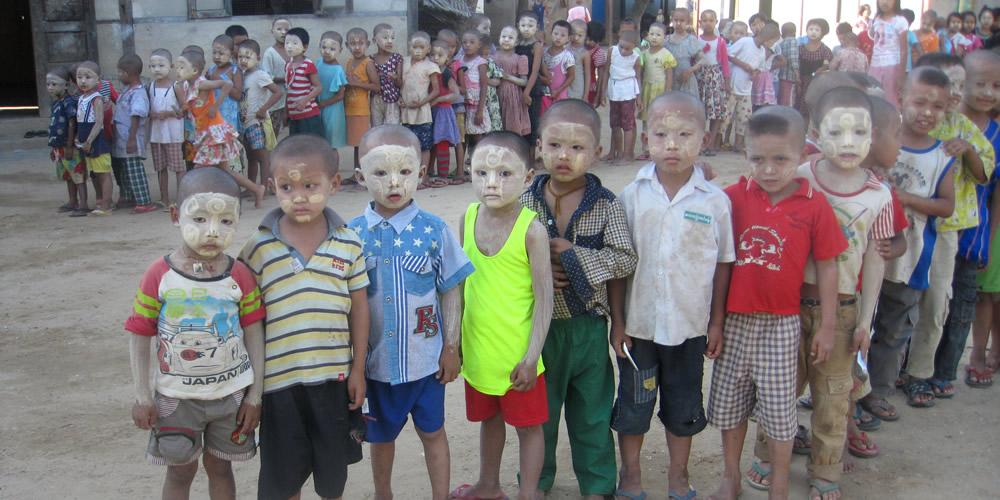 Day 17 - Inle Lake - Kunhing
Today we ride in an region largely unvisited by tourists. We drive eastwards into the mountains with beautiful views and a myriad of small traditional villages. We stay overnight in a simple lodging in Kunhing.

Day 18 - Kunhing - Kengtung
We continue our scenic route through this little-visited and fairly isolated region. Along the way we will encounter different ethnic groups, including the Padaung and the Akha peoples. We sleep in the small mountain town of Kengtung. From afar one sees the large Buddha statue of the Yat Thaw Mu Temple, rising  majestically above the town. Due to the altitude it is usually pleasantly cool here.

Day 19 - Kengtung - Mae Sai
In the early morning we can visit the vibrant, colorful Kad Tao market of Kentung where many goods from Thailand and China are available, but also traditional clothing and antiques. There is also a bustling market in Tachilek on the Thai border where you will have the opportunity for last minute purchases before we cross over the border. Just across the border lies the small town of Mae Sai where will we spend the night.

Day 20 - Mae Sai - Chiang Mai
A beautiful mountain route through Northern Thailand brings us to the final destination of our trip.

Day 21 - Chiang Mai - Flight departure
Departure to the airport for your (international) flight. 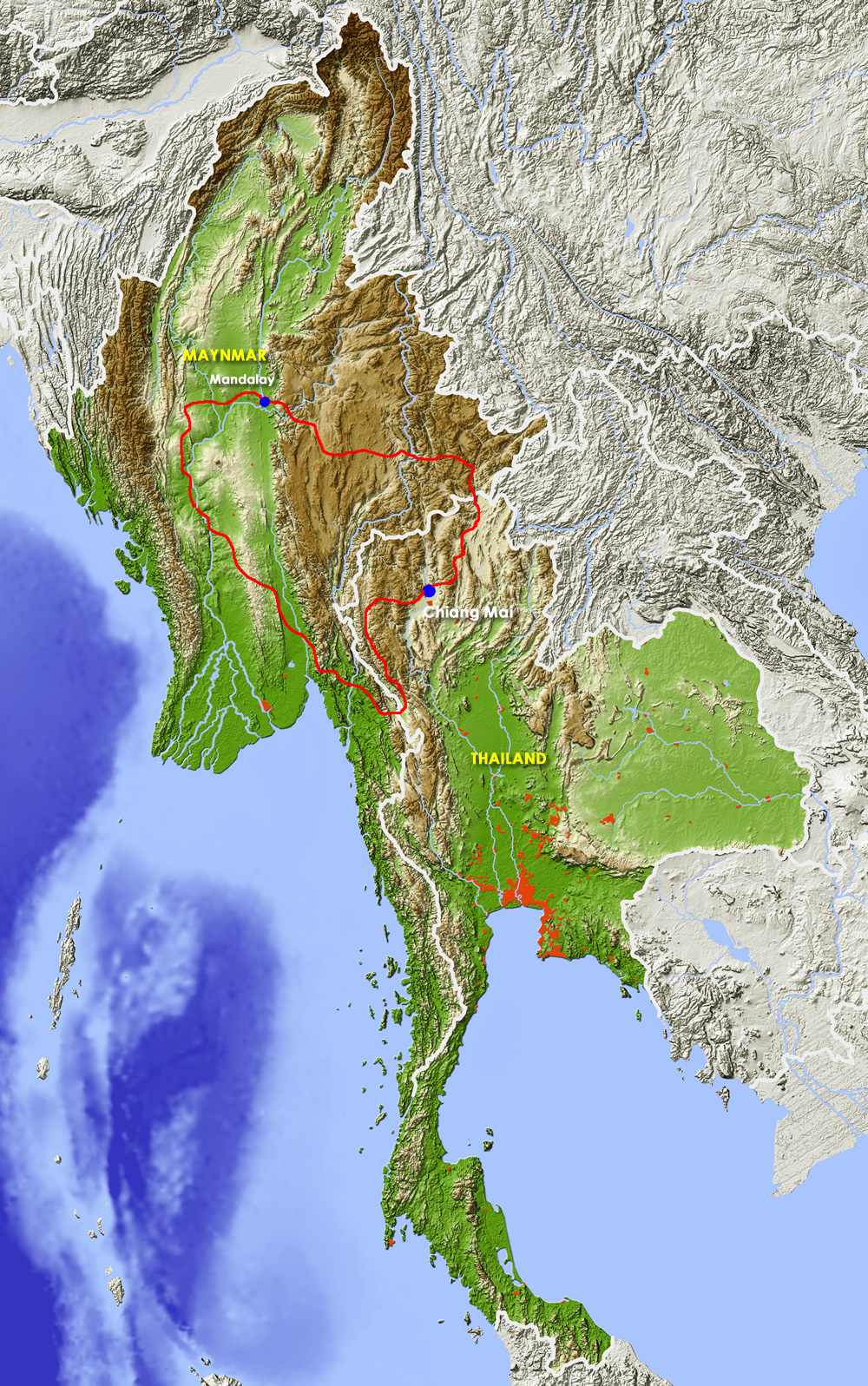